How To Play Spider Solitaire

One of the most played Solitaire games on the internet is Spider Solitaire, thanks to Microsoft who made it very populair by including it in Windows. The rules are slightly complicated and so many people would like to know how to increase their chances of winning. Here you’ll find a strategy for Spider Solitaire.

The objective of Spider Solitaire is to place cards onto the table in an ascending sequence of the same suit. Of course this sounds easier said than done. Especially in the Four Suit Spider version, finishing the game may seem impossible.

There are some strategies that will up your chances of winning. But before getting any further into that, a brief remark up front. I’m assuming that your game has an undo button and that you’re OK using this feature. Most Spider Solitaire games on our site have an undo button. Some people though would rather play a game that does not have this button, because they feel it’s like cheating. These people may still find this article useful, but not all tips will work for them. 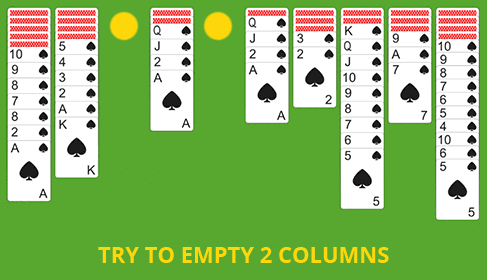 So how to win at Spider Solitaire? Easy! The empty columns play a key role! Therefore your first objective in Spider Solitaire is to get an empty column. Next, try to empty another one. As soon as you’ve emptied two columns, your chances of winning will be much better (see image). But, if possible, you should try to get a third empty tableau. Once you’ve emptied three or four columns, your chances will increase considerably, unless you’re dealt very difficult cards. How to obtain your first empty column? The first step in the game depends on the highest card that you’ve been dealt. If given a choice, only play the cards on the right, since the six rightmost stacks each have one card less.

Next, play the cards in order of priority:

Maintain this strategy until you manage to empty a column or run out of options.

As soon as the first column is empty your objective will change slightly. You now have three important goals: cleaning up, reorganizing and exposing new cards. It is essential that you keep the columns vacant. This is because empty columns open up many possibilities for you to finish the game. So if you do decide to place cards on them, only do so temporarily.

In Spider Solitaire your first objective of phase two is to clean up. I’ll be using this term to refer to the rearranging of columns and thus all cards will eventually consist of sequences of a single color.

For example, you have 2 tableaus. The first one consists of:

The second one consists of:

We can temporarily make use of the empty tableaus to rearrange the columns in order so we can change them into:

We’ll do so by taking the following steps:

Move the four of Diamonds to the empty tableau

Four of Hearts onto Five of Clubs

The important thing is that after cleaning up the empty column is still free. This is critical as you want to keep as many columns available as possible.

After you’ve emptied the card sequences, our next goal is to rearrange any columns you can. You can do this by moving any sequences you can, to form longer rows. If this will expose some new cards, you should always move it.

Finally, you should try and find new cards (expose them), while trying to keep the empty columns. We’ll do this with the undo button.

• Move a playing card or sequence to a vacant column so that a new card is exposed.

• Do the new card allows you to move back the original sequence? Then do so!

Does the new card not allow you to move back? Then try to move another card or sequence. If it’s not possible to expose any new cards without keeping the columns vacant, then you have to try dealing cards from the stock.

Creating empty columns is the most important thing you’ll have to do and don’t forget to keep them vacant. Does this strategy guarantee you to win the game? The answer is no. Is there a better strategy out there? Yes, there is! If you play Solitaire more often, you will start to develop a strategy of your own. Hopefully the above strategies will give you some pointers on how to win more games of Solitaire.