Although Spider Solitaire hasn’t been around as long as the other varieties, it still has some history. The game got its name because a spider has eight legs and there are 8 discard piles that have to be filled and it is also true that the game is based on a similar Solitaire game called Scorpion. This game originated in 1949 and became a popular variety among players of Solitaire.

When the game was introduced, players had to make at least 8 stacks of 13 cards. This proved to be a little too challenging, and over the years new versions were added to improve the game’s playability. New varieties were added with 1 and 2 suits, which simplified the game and increased the chances for a player to win.

There are a number of basic rules in solitaire, which are:

• The main objective in Spider Solitaire is to clear the board of all cards.

• If you have a sequence (King-through-Ace) you may remove it from the table.

• A total of 54 cards needs to be dealt which are then divided over 10 stacks.

• In preparing the game, the cards are placed onto the table face down except for the two upper cards of each stack.

• The stacks must be placed in a descending sequence from King to Ace. The colors of the card aren’t important, but the stacks and suits must match when removing a sequence from the board.

• A sequence of cards of the same color and suit may be moved onto another stack. 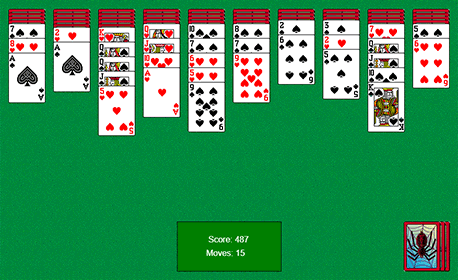 The first version of Spider Solitaire gained popularity owing to Microsoft Windows 98 plus. It also came preinstalled with Microsoft ME, which boosted the popularity of solitaire among PC users considerably. As a result the number of players increased dramatically. The Windows version came with the 1, 2 and 4 suit editions and varieties. Spider Solitaire Windows 98 is still known as the best one ever made. Some versions of Spider Solitaire can be quite hard and require complex problem-solving skills. This is why most players develop a slight addiction to the game. Many people spend an enjoyable evening playing solitaire. Thanks to our website, spidersolitaire.co.uk, it has now gotten a lot easier for players to enjoy this fun game online. There are many different games available on the site, so pick a version that you really like!